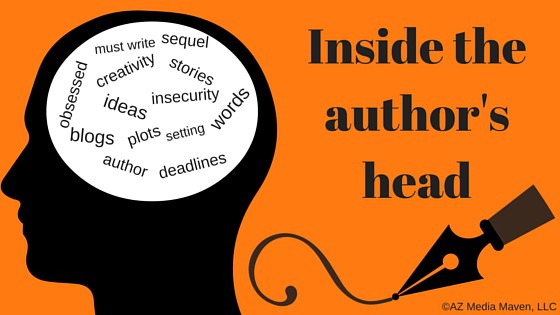 I don’t get distracted. Really, I don’t. It’s just that at times, I have conflicting writing agendas in my brain that are competing for attention; I have difficulty deciding on which one to concentrate. It’s kind of like zipping through the FM radio dial in my car, trying to find a tune I want to listen to at that moment and but nothing is grabbing me. Hearing the cacophony as I scan stations makes me anxious and unsettled, yet I do it because I need to find THE ONE SONG that will draw me in and calm me. That’s the way my head is when I sit down to write. It’s always running through a litany of scenarios (stations) tempting me, daring me to fine-tune my brain (radio) to settle in on just one. And then, a revelation! I find “it” and I breathe a sigh of relief because I can now focus on one thing for the rest of the night.

Life is stressful enough without this added burden, yet I continue to juggle gaggles of stories in my head because, well, they’re just there. They always have been and I suppose they always will be. Like last night. My goal — as it is every night — is to come home, sit down and continue writing the sequel to Persona Non Grata, which I have tentatively titled, Day of Reckoning. The best laid plans, of course, tend to go awry when I realize I need to “blog” instead. It’s been a couple of weeks and I’ve been putting it off.

Now, you’re probably thinking, “Are you frickin’  kidding me? This is the problem that’s giving you anxiety? Puhleeze! Can’t decide whether to blog or finish your sequel? That’s laughable. I sure wish I had your problems!”

Absurdities and other masochistic tendencies

No matter how fulfilling writing novels is for me, it is an absurd profession. I mean, who would choose to do something where the odds of success are slim to none? I often think no one is going to want to read what I have written, or, if by some miracle someone does read my novels, he or she will not like them and then post online what an awful writer I am! “Who does she think she is publishing such drivel?” This is the seesaw of masochistic behavior. The merry-go-round of insanity. Torturing myself day in and day out putting words and sentences to paper, then tormenting myself by thinking I’m no good. How will I ever become a well-known fiction writer? What is the secret to success? Will I ever sign on with a major publisher before I’m 65? Oh, woe is me!

But, there is good news! I am about finished writing the first draft of Day of Reckoning and I am pleased to say I like it. A lot. Really. This doesn’t mean I didn’t have serious doubts about the story line midway through or that I won’t find discrepancies in the timeline upon editing it. I mean, my brain is only so good at remembering details day after long day while still working my day job. Still, I can say unequivocally that I think it’s even better than PNG.

While I’ve been completely absorbed with and enthused about crafting an exhilarating ending to DOR — one that will have the reader begging for a third novel in the series — the bad news is I’ve been dragging my butt getting it done. I’ve been working on the ending for more than a week now, mainly because I’ve been sidetracked with the need to promote PNG if I expect to sell books and engage people and become known as a fiction writer. I’m not a natural self-promoter or marketer — I hate that part of the business — much preferring to hide behind my laptop and churn out stories. (Have I mentioned I love living inside my head?)

I’ve been told that blogging is a step in the right direction; that all successful writers engage in this modern phenomenon. But again, it’s not my cup of tea. I’ve often and arrogantly considered this form of writing as beneath me. After all, everyone is a blogger these days, right? But that’s okay. I’m learning to accept it and love it because I understand that my fans (did I actually use that word?) want to know what I’m thinking, what drives me and what I have planned next.

I know, it’s a tough job, but someone’s got to do it. My fans are eagerly awaiting the sequel and I plan to deliver. Very soon. Do not worry. I am driven and nothing stops me. Not even the distractions in my head.